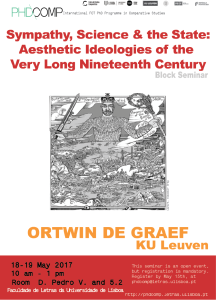 The Enlightenment ideology of sympathy (as philosophico-anthropological secular alternative to theo-teleological accounts of human sociality) is doubly dependent on the power of the aesthetic, which provides the possibility conditions for the experience of universal assent and informs the production of fictions fabricating such experience. In the course of the 19th century, the scientific articulation of natural evolution as radical purposiveness-without-purpose and the increasing need to represent a massively expanding body of humans as citizens both complicate and reinforce this dependence. After introducing the basics of the ideology of sympathy, this seminar focusses on its circulation in writings by Matthew Arnold, Thomas Henry Huxley and H.G. Wells, three 19th-century men of letters who emphatically profiled themselves (next to their occupations as poet and critic, scientist and novelist) as public intellectuals. Despite, and because of, this 19th-century focus, Post-Truth, Trump and Brexit will be hard to avoid.

This seminar is an open event, but registration is mandatory. Please register by email (phdcomp@letras.ulisboa.pt) by May 15, 2017.